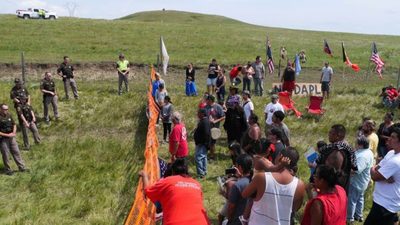 About Support the Norcal Caravan to the Dakota Access Pipeline Blockade

This ribbon was created by Mendo Indigenous Solidarity on August 25, 2016

Since April, indigenous people and supporters have galvanized a historic protest near Cannon Ball, North Dakota, that has halted construction of the Dakota Access Pipeline: a 1,168-mile-long mega-project that would carry crude oil from the Bakken oil fields to Illinois (via South Dakota and Iowa). From there, it would link with another pipeline that would transport the oil to terminals and refineries along the Gulf of Mexico, perhaps also connecting to rail lines that would bring the oil to the East Coast.

July was the hottest month on record across the globe, marking 15 consecutive months of record-breaking global heat. Yet, the energy company Energy Transfer Partners -- including investors such as Enbridge and Marathon Petroleum Co. -- is poised to construct one of the largest oil pipelines in this nation's history.

But the pipeline threatens water supplies and sacred lands of indigenous people, particularly those of the Standing Rock Sioux Reservation, a community of 8,500 along the Missouri River in North and South Dakota. They have responded by mounting one of the most incredible direct action campaigns in recent memory.

Those on the front lines of the blockade have called for more supporters to join them, as well as for donations of money and supplies.

Now, I want you to meet Sierra Rose Alexander, a young woman from the Northern Cheyenne tribe who recently moved to Willits, here in Mendocino County. Her people are an integral part of the pipeline blockade. Sierra is raising funds to support her, along with a handful of other local people, to travel back to North Dakota to join the courageous people on the front lines of this protest.

My name is Sierra Rose Alexander and I'm a member of the Northern Cheyenne tribe who recently moved to Willits, CA. I grew up with the teachings that water and women are of the same spirits and have the ability to give life. We have to protect our Mother Earth and our water.

I can feel the energy coming from Standing Rock and wish to be there with my relatives. Nations of all four colors have reached out with their support for the efforts against the Dakota Access Pipeline. It is a scary, yet powerful time for all of us. I invite you all to journey to North Dakota and stand in solidarity for our well being, and that of those to come.

We have a growing travel fund for anyone interested in traveling to the Standing Rock Reservation. We are looking for participants and also any supplies/donations to make this trip possible. If you are interested, please contact me at

Thank you to everyone making this possible.

As you see from Sierra's letter, others from Mendocino County -- indigenous and non-indigenous -- are joining this caravan. First, we are looking for financial donations.

WHY THIS IS IMPORTANT

Why is this blockade so important? Here's one reason: Only a few years ago, the oil industry was pushing ahead with projects like the Keystone XL pipeline, and the Northern Gateway pipeline through British Columbia, which would have enabled delivery of enormous volumes of the high-carbon crude to the West Coast.

By that point, the US has passed Saudia Arabia as the planet's biggest oil producer. At a moment when the world needs to be jamming on the carbon brakes, the US was continuing to rev the engine.

But grassroots opposition to Keystone XL led President Barack Obama to veto the project in 2015. And determined opposition by some of the most systematically disenfranchised people in North America — Canada's indigenous people — has been the main obstacle to the Northern Gateway's completion. As a result, the tar sands are effectively landlocked, and the oil industry has been forced into their current efforts to ship smaller quantities of this carbon-intensive product by rail.

These victories have helped turn the tide against extreme oil extraction. While the richest and most powerful among us try to drive the world to destruction, indigenous people are taking the lead in protecting the planet. Now, the people of Standing Rock and surrounding areas have stood up, and it is up to us to stand up with them. Please support in whatever way you can.

Support the Norcal Caravan to the Dakota Access Pipeline Blockade

I can feel the energy coming from Standing Rock and wish to be there with my relatives. Nations of all four colors have reached out with their support for the efforts against the Dakota Access Pipeline.

Aurora Valentine made a $25.00 donation.

Anna Marie Stenberg: Thank you for doing thisI am with you in Spirit and Prayers

Charlotte Macken made a $25.00 donation.

About | FAQ | Contact Us | Ribbon Directory
EverRibbon © 2010 All Rights Reserved